I first heard about the Blarney Stone when I was about 11 years old and a friend of mine went to Ireland with her family. She told me all about how she had to lean way over this gaping hole to kiss a magical rock that supposedly makes you talk real good.

I was enchanted and immediately added it to my bucket list.

So when Leslie and I were planning our trip, the Blarney Stone was one of the top ten places I was most excited to visit. 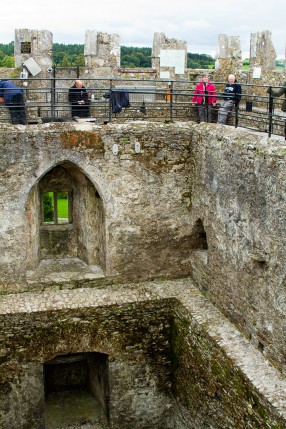 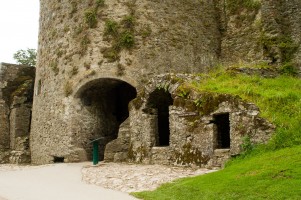 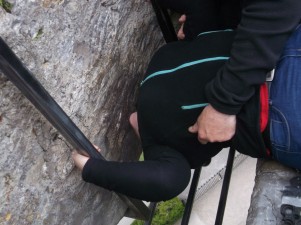 I know, I know: It’s a super awkward photo. But it’s proof that I kissed it! (Photo by Leslie) 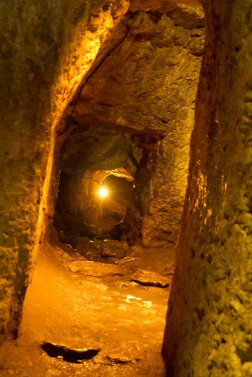 A sign outside said, “As the centuries have progressed, what you will find within has become more mysterious. A labyrinth of underground passages and chambers, dating from different periods in the Castle history, and mostly now inaccessible, are beyond the most intrepid explorer.” 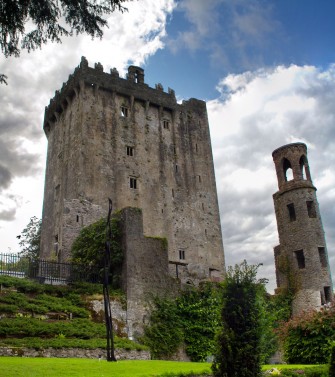 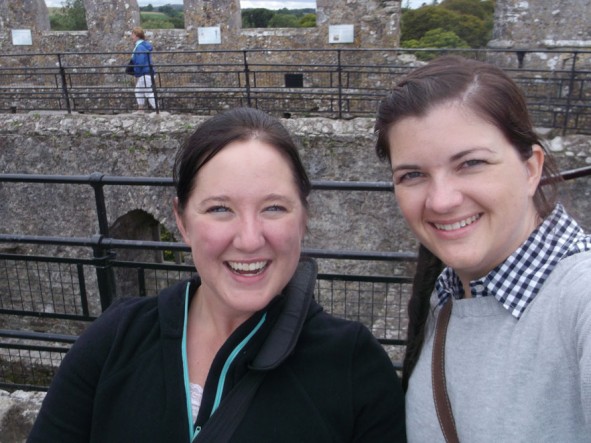 The main order of business, of course, was kissing the stone. We climbed up to the very top of the castle, waited in a long line, and then had about five seconds each to lay down and kiss the Blarney Stone. It was way less scary than it looks because there’s a grate to keep you from falling to your death—but it was still a thrill.

And then I started thinking about all the other millions of people who have kissed it and I got a little grossed out. I guess the gift of gab comes from making out with a gazillion strangers…

Leslie says, “I loved all the narrow stairs and how you could easily lose your sense of direction. It was interesting to see the layout, like the fact that the kitchen was on one of the upper floors. I wish the line to kiss the blarney stone wasn’t so long, so I didn’t feel like I was being hurried out without getting a decent picture… I kissed a stone full of sooooo many germs and turns out the gift of the blarney isn’t real? Darn!”

Blarney Castle was built in the late 1480s by Cormac MacCarthy. (Not the American Novelist—that’s Cormac McCarthy.) Shortly thereafter, he was killed by his own brother, Eoghan, who was then killed by his revengeful nephew, Cormac Og.

Maybe they should have kissed the Blarney Stone and talked about their problems instead of just running around and killing each other. 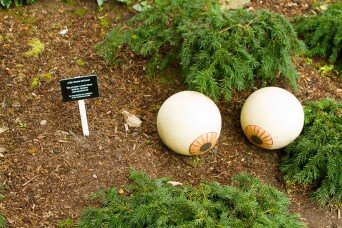 I have no idea… Artist: Sandra McCown Title: A Good Gawk Medium: Ceramic 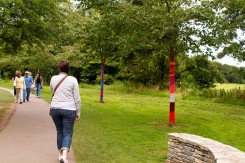 The trees lining the walkway up to the castle were very well dressed. 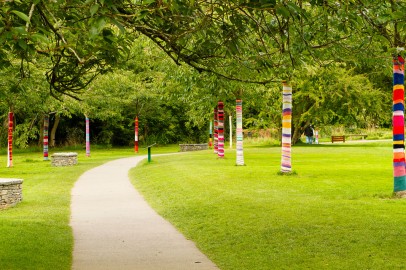 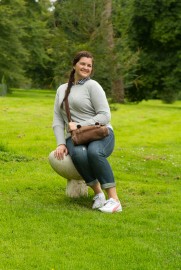 As it turns out, there is more to Blarney Castle to enchanted you than just the famous stone. The grounds are spectacular and vast, and we easily could have spent an entire day there.

Leslie said, “I remember looking at the map and being sad that we had to decide what to see and what to skip for lack of time. I would also recommend people give themselves an entire day to spend here simply because it’s beautiful and there was so much we didn’t get to see.” 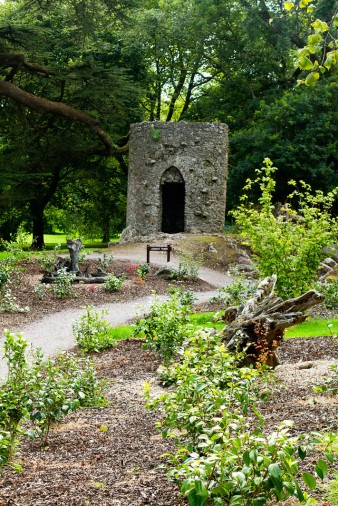 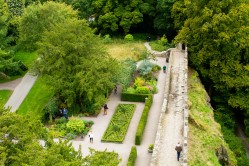 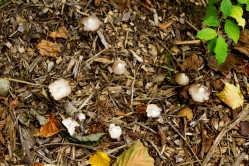 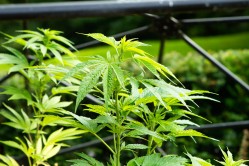 One particularly amusing section was the Poison Garden, which was full of all sorts of fun and deadly plants. There were mushrooms, nightshade, crab apples (included because the pips contain cyanide), and this lovely green plant with five-pointed leaves that I hear is really popular in states like Oregon. 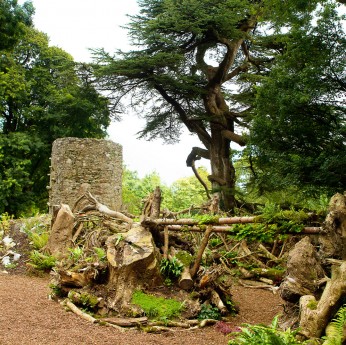 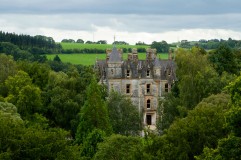 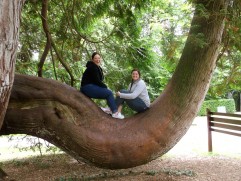 This tree was a Thuja Plicata, also known as a “Green Giant” or Western Red Cedar. 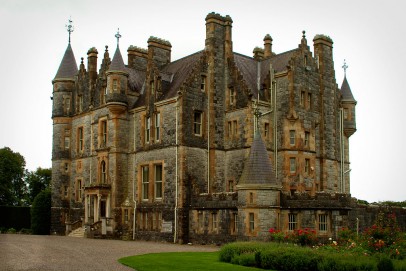 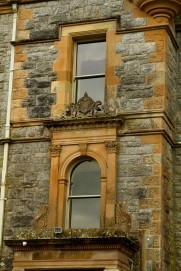 While wandering around a forested area of the grounds, Leslie noticed a group of American women trying to get a picture in a huuuuuge Thuja Plicata tree. She offered to take their picture, and we struck up a conversation with them. Turns out, they were from Holiday, UT, and they were LDS! It was a mother, several daughters, and a daughter in law, and they were just finishing a week-long, girls only vacation in Ireland. They were absolutely delightful, and I regret not getting a picture with them. 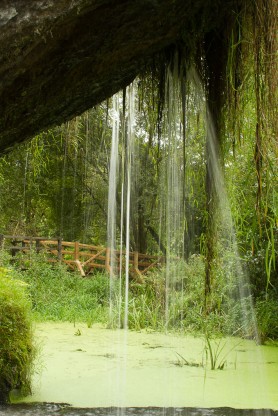 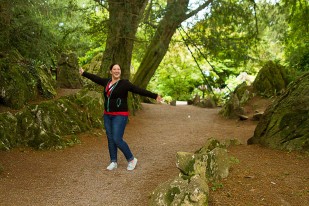 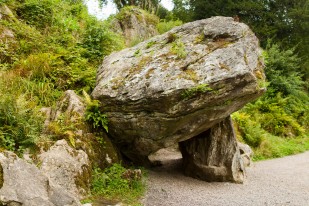 That hole under the rock is apparently a portal. I climbed through it and ended up in a magical place called Ireland. 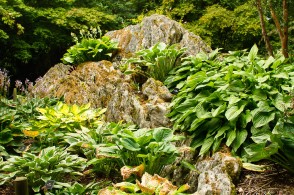 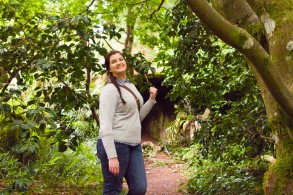 We probably spent the most time in the Rock Close. It’s a natural playground full of rocks (obviously), ponds, waterfalls, jungle plants, and mysterious caves and passages. We even saw a leprechaun, but he got away before I snapped a picture. 😉 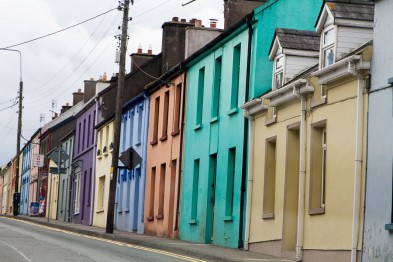 I wish I could remember where we were when I snapped this shot, but it could be anywhere. Every town we drove through had colorful houses like this. 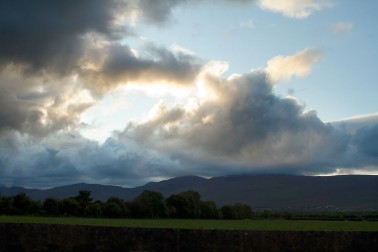 When we left Blarney Castle, we drove through Killarney National Park to get to our hostel for the night. The mountains were lovely, especially shrouded in storm clouds as they were. We actually got a nice long view of those mountains and those clouds after we checked into the hostel and asked the owner where the nearest grocery store was. He directed us to a Lidl, which was “just a few miles away.”

Yeeeaaaah. We drove for an hour before we found it.

Where We Stayed: Killarney International Hostel

+ Lovely place full of lots of character. The staff were wonderful and very helpful. Nice, clean bedding, and lots of showers.

– The kitchen closes at 10pm. We arrived a bit late and wanted to get some dinner, and after a loooooong drive to the nearest grocery store, we only had a short time to cook, eat, and clean our dishes before it closed. The showers also don’t have any racks or shelves for your stuff, which was a pain.

Planning a trip to Ireland? Be sure to add Blarney Castle to your itinerary! 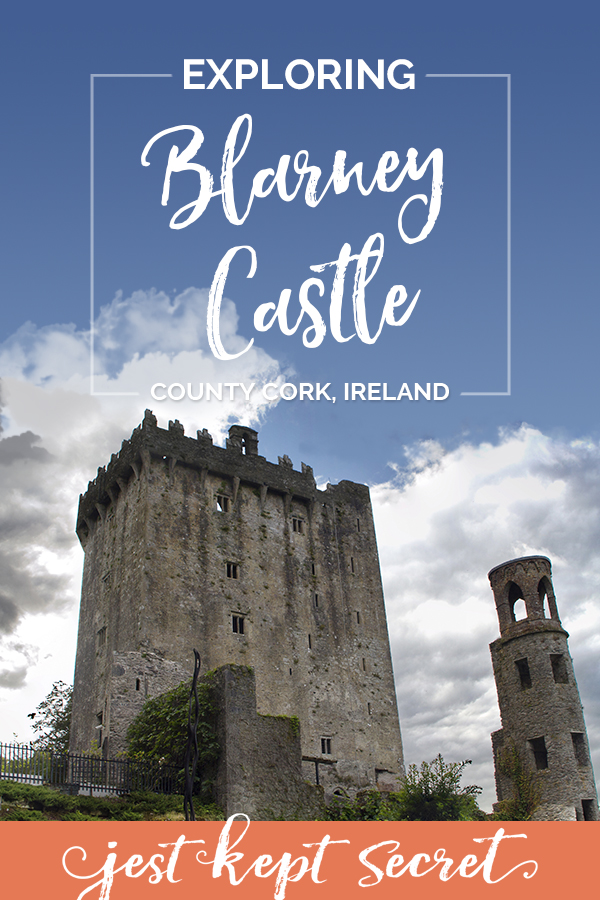