And They’re Off! Race Day at Newcastle Racecourse

I don’t think it’s any secret that I am completely obsessed with horses. I was the little girl who would gallop around the playground on my invisible mount, whinnying and snorting like a fool. I’d play “Man From Snowy River” with my sisters, and instead of arguing over who got to act as Jim or Jessica* or Spur, we’d argue over who got to play which horse. (Old Regret was always the coveted role then, but today, I have a much greater appreciation for trusty old Denny.) I even tied a rope to the handlebars of my bike and tried to steer like I was using reins.

Yeah, it’s just about as effective as it sounds. Safe, too.

I watch the Triple Crown races on TV almost every year. I pick my favorites** and cheer my little heart out. My sister Kate (who is way more knowledgeable about racing than I am) doesn’t think we’ll see another Triple Crown winner. I still cling to that romantic hope that maybe this year will be the year. Maybe this horse will be the one. I’m always wrong, of course, but someday, I’m going to see the next Secretariat in action.

A few weeks ago, I attended the races here in Newcastle. I had been to a live race day before***, but that was racing on the flat. This was a steeplechase, and BOY was it fun!

The weather was gorgeous, and the crowd was a lively bunch. Mixed in with all the tailored suits, skirts, and fancy hats were quite a few characters who kept things interesting.

These races were different than those I’m used to in a couple of ways: the jockeys aren’t quite as small, the horses aren’t quite as big (well, at least not all of them–there were quite a few that were easily 17hh, but several that were no bigger than 15), the races are longer (the shortest race that day was 2 miles!), and with the extra challenge of jumping hedges thrown into the mix, there were quite a few horses who left their jockeys behind. (Don’t worry–no one got hurt.)

My favorite difference between the races I had been to before and this one was how close I could get to the horses. I was able to stand close enough to the rail of the post parade ring that I could have reached out and touched the horses if I had wanted to do a crazy thing like that. It was really convenient for getting a good look and picking my favorites.

By the end of the day, I had picked the winner once and the 2nd place finisher 5 times. (The horse I picked for the final race came in dead last…) And as I stood near the winner’s circle and watched the grooms tend to their four-legged friends, I envied them and their association with such talented equine athletes.

I need to go riding. STAT.

If you’re planning a trip to northern England, a visit to Newcastle Racecourse would make a great addition to your travel plans. Be sure to save this to your travel board on Pinterest! 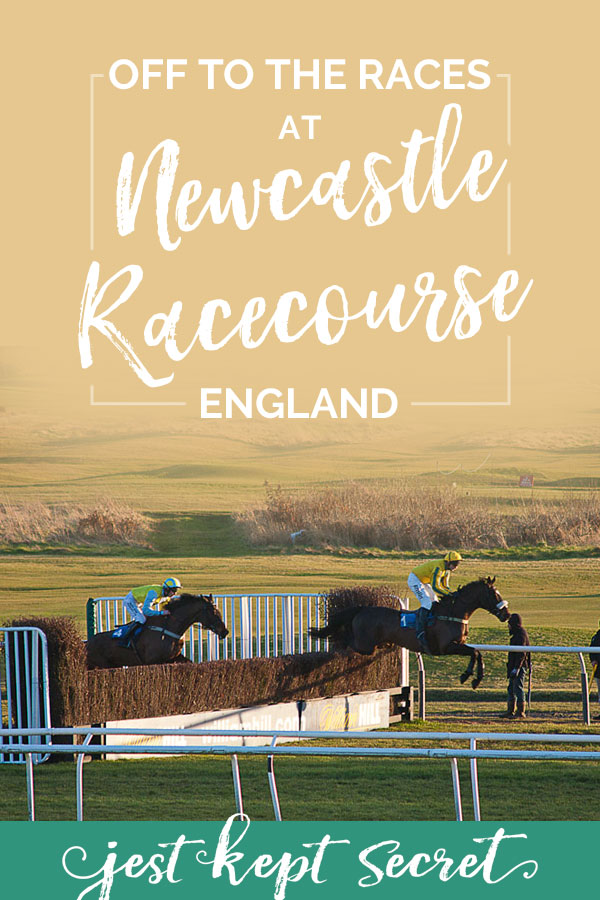 * I’m actually named after her, so my love of horses was destined from the very beginning.

*** We went to Les Bois racetrack in Boise to watch Quarter Horses races for Family Home Evening once. It was one of the my favorite FHEs ever.