I knew it was going to be a good day when I walked out of my flat and saw a horsebox for police horses on my street. I wasn’t entirely sure why it was parked there, but considering I live next door to some army barracks and just the day before, a Chinook helicopter had buzzed my roof and landed in the park behind us, my curiosity was seriously piqued.

And then I walked out to the main road and discovered an enormous crowd and traffic backed up for miles.

What in the world?

I kept walking, pushing through the throng of people, and noticed a significant number of black and white shirts. Ah, yes. Football. It was the match between Newcastle United and Liverpool—a game of enough significance that it earned a spot on the Yahoo front page later that day.

And my friends from the horsebox? I caught a glimpse of them between two buses from Edinburgh as they clip-clopped their way up the street. Turns out, they are just football fans, not engaged in any top secret military maneuvers. (Darn.)

But my day was not spent shouting “Haway the lads!” at our local footballers. Rather, I left the city behind, hopped on the Metro, passed a stop called “Brockley Whins” (which made me rather happy for the apparent victory of one of my favorite veggies), and arrived at Tynemouth, a quaint little village on the coast.

Every weekend, there is a market at the Tynemouth Metro station. I wandered around for a bit, admiring the many antiques and collectible and laughing at some awesome Geordie greeting cards. I also tried my first taste of Turkish Delight.

It was far less delightful than Edmund Pevensie had led me to believe.

And then I was off to the main attraction: Tynemouth Priory and Castle.

This isn’t your stereotypical fantasy castle, either. It’s actually a fortified monastery with quite a colorful history. The monastery was founded in the early 7th century. It was plundered and destroyed by the Danes, then subsequently rebuilt. It provided refuge to fugitive kings and housed the bones of St. Oswin before it was disbanded in 1538 and later dismantled. During World War II, the British military used it to defend the mouth of the River Tyne.

And of course, with that much history (and the bones of dead saints), there is bound to be a beautiful cemetery to honor all those lives.

But perhaps my favorite part was the tiny chapel that’s left, with its lovely stained glass windows and incredible door.

I had planned on visiting a few other sites while I was in Tynemouth, but I loved the Priory and Castle so much that I spent all my time wandering the grounds and taking advantage of the amazing light. By the time I finished, the sun was starting to set (which, admittedly, happens rather early these days) and I needed to get back to the metro and head home.

I will definitely head back out to Tynemouth again, and I wouldn’t even be averse to the idea of visiting the priory a second time.

If you’re planning a trip to England, be sure to save this post for later! 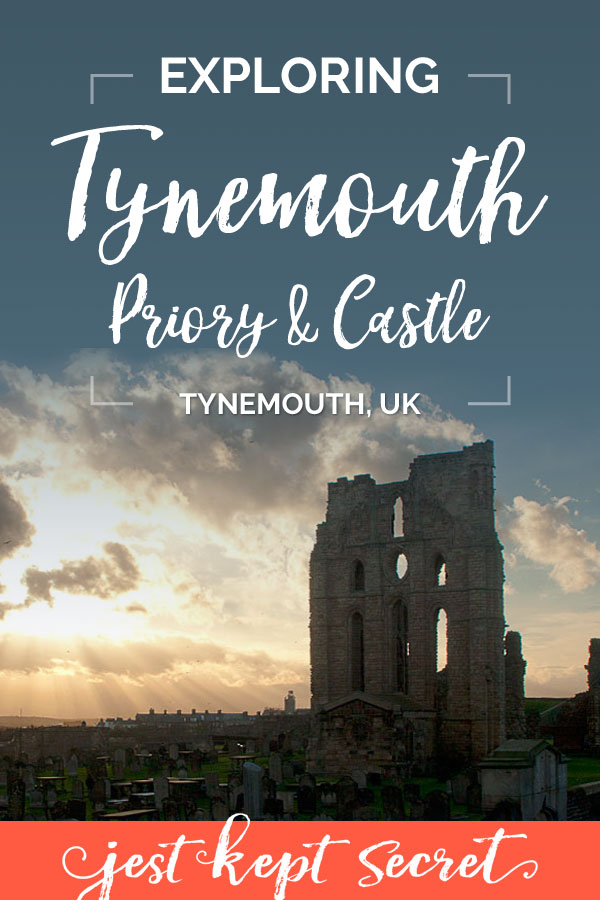