Elizabeth Berkley once said, “I will never forget experiencing Venice for the first time. It feels like you are transported to another time – the art, music, food and pure romance in the air is like no other place.”

Amen to that, sister. If I thought Paris was romantic, it’s only because I had no idea how charming Venice would be. 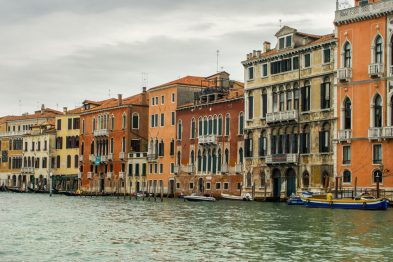 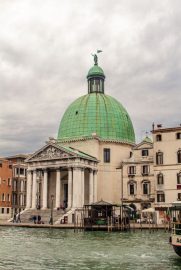 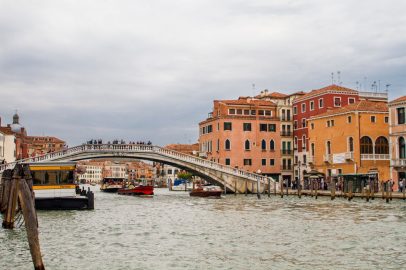 Our hostel was right on the grand canal and only a short walk from Venezia Santa Lucia, the train station on the island. After enjoying some sandwiches on the steps of the train station, we dropped off our bags and went exploring.

Pro Tip
There are two train stations in Venice. Venezia Maestre is on the mainland, and regular train tickets will only get you that far. From there, you’ll have to get a ticket to Venezia Santa Lucia, which drops you off at the Grand Canal.

Exploring the City of Canals meant hopping on a floating bus. The water taxis are very convenient, and also very crowded. Even getting on can be exciting, since everyone tries to shove on all at the same time.

Leslie: Part of the charm of Venice was the fact that it has waterways instead of roads everywhere. It was fun to cross the waterways over bridges and to watch the gondolas pass by, and to take a water taxi rather than normal transportation! 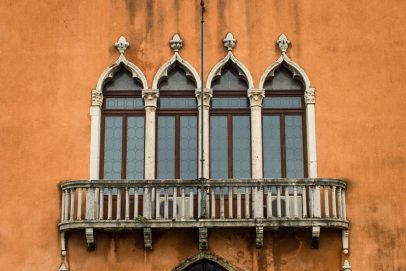 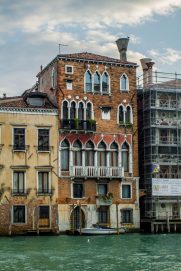 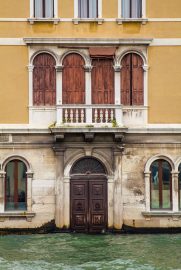 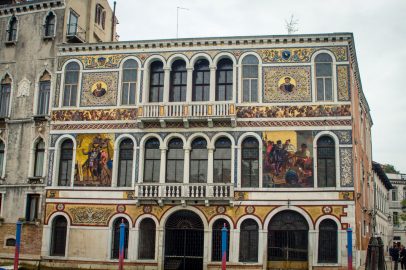 We were lucky enough to be able to squeeze through the crowd and get good standing spots at the edge, where we could see the incredible architecture along the Grand Canal. I could not get over the doors and windows—so many shapes! So many colors! I loved that they had garages for boats instead of cars, and the balconies made me weak in the knees.

Leslie: I loved seeing Venice for the history, and just the romantic reputation that it has. I think pictures of Venice make it look all bright and shiny[1], when in reality I was surprised to find that the buildings were so weather beaten and run-down, which makes sense because of their age. They didn’t look nearly as bright and colorful as photos I have seen of Venice, but that’s another part of the charm of an old city. 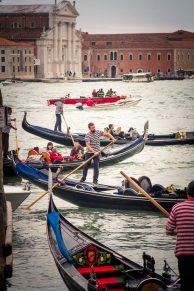 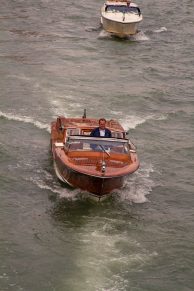 These boats reminded me of the Italian Job 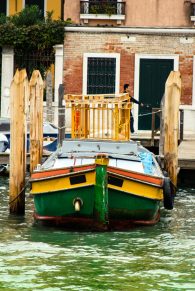 I can’t get over the cage on the back. 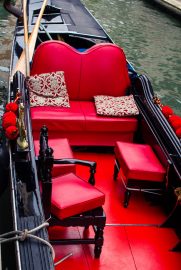 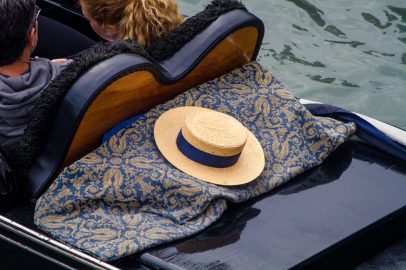 And there were boats everywhere, obviously. I was fascinated by the many different varieties, from gondolas (of course) to vintage wooden boats to modern motor boats. We even saw an ENORMOUS cruise ship pass through the wide canal on the south part of the island.

Leslie: I doubt I’ll see anything like that again in my life!

Here’s a video of the monstrous thing:

After disembarking from the water taxi, we wandered around the smaller canals in search of bridges, of which there were plenty. 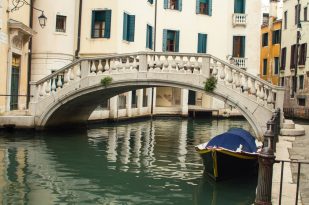 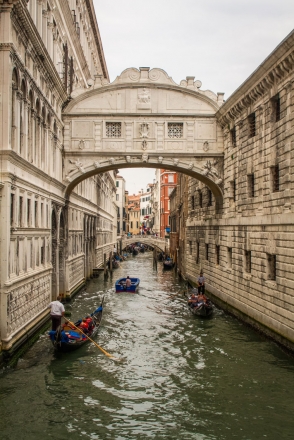 This famous bridge connects the New Prison to the interrogation rooms in the palace. It is called the Bridge of Sighs because it gave convicts their last view of Venice prior to being locked away. (Wikipedia) 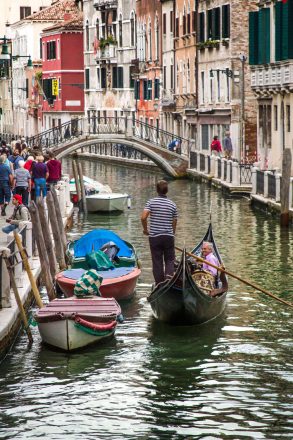 But the thing you need to know about bridges in Venice is that they’re not just functional, necessary things. They are works of art. They connect you from one side of the canal to the other, sure, but they do so with so much style that it would make Tim Gunn swoon. 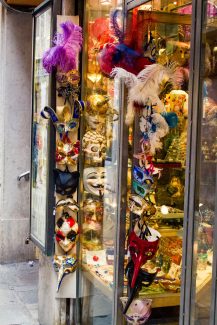 Carnival is an annual festival in Venice where everyone engages in more *cough* carnal pursuits just before Lent starts. 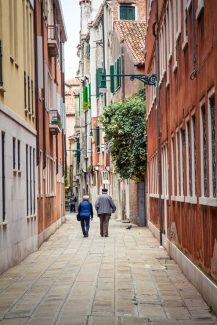 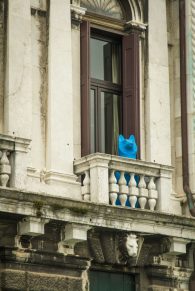 I spy with my little eye something that is blue. 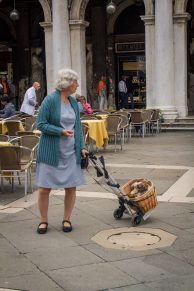 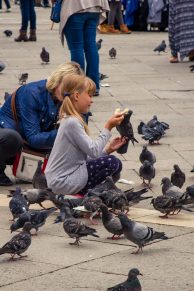 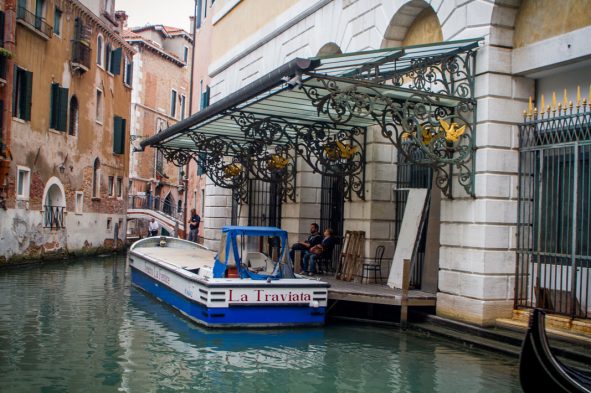 Fenice is not actually a different spelling of Venice, as one might suppose. It’s actually the Italian word for “Phoenix”, and it was so named because the theater has been burned and rebuilt three times!

And the back “streets” are full of so many fun details. It was like playing an eternal game of I Spy.

Leslie: There was plenty we wanted to see, but we didn’t have to wear ourselves out to see it because it was all close to each other. The ambiance of the city is so mellow; even with all of the tourists, things like live music at restaurants, and the gondoliers, and how quiet the city streets where when you left the main thoroughfares just broke through any hustle and bustle and made it feel peaceful. 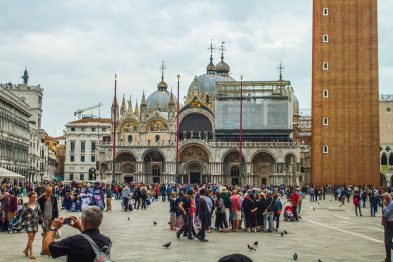 This was my favorite part of the Saint Mark’s facade. I love the green stone inlay! 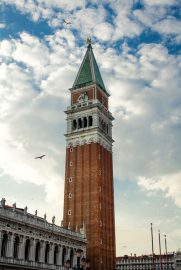 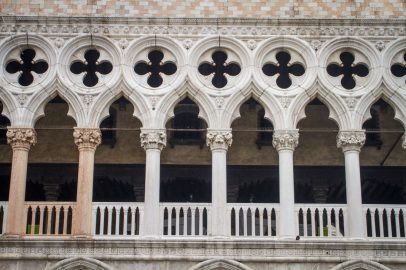 My favorite part of the city was the Cathedral San Marco. While we waited in line to get in, an older gentleman struck up a conversation with us. His name was John and he was from Bristol. He is a retired academic and spent 30 years lecturing on the preservation and restoration of historic cities. How cool is that?! He knew a lot about San Marco and told us it is the best example of mixing Eastern and Western influences in the entire world.

We couldn’t take pictures inside, but it was really impressive—almost overwhelming, actually. Every square inch was embellished with mosaics and gilding. It was terribly gaudy, but the craftsmanship and artistry were nothing to snort at. (You can see some pictures here.)

No matter how many cathedrals I see, I still marvel at the creativity and passion their construction required—and in a day and time when they didn’t have our technology, no less. Huge buildings are commonplace now, what with our mechanical cranes and concrete, but imagine how much more impressive those places must have seemed when they had to use manpower and simple machines to lift heavy blocks and slabs of marble—many of which were also the result of months or even years of an artist’s blood, sweat, and tears. Crack a piece of concrete and you only lose a bit of money. Crack a marble statue and you lose a piece of someone’s soul. 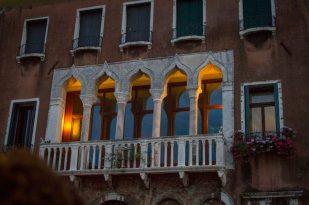 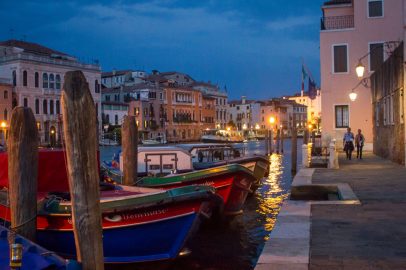 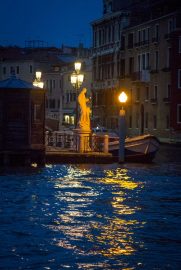 After enjoying delicious pasta (and flirty waiters!), we wandered until our feet hurt before heading back to our hostel at dusk. We weren’t quite ready to turn in for the night, though, so we sat on the edge of the canal and listened to the quiet stillness of the city at rest. No honking cars or noisy bar-hoppers interrupted the stillness, and the only sound was the lapping of the water and the creaking of the ropes that tied boats to their moorings. It was one of the most relaxing moments of the trip, and whenever I think of Venice, I will always think first of letting the city rock me to sleep.

Where We Stayed: L' Imbarcadero

+ This is a lovely little hostel. There are few frills, but it’s right on the Grand Canal and within a 10 minute walk from the train station. The staff (two Italian girls and a German intern) were excellent—very friendly and helpful. It was clear they enjoyed working together and liked talking to their guests.

– The lockers weren’t very secure—just storage closets with a tiny chain an a lock like you’d find on a 10 year old’s diary.

Type of Room: 4 bed female dorm and a mixed dorm (we got the last 2 beds in the hostel and weren’t in the same room)

[1] Well, maybe not mine… WordPress is doing that thing again where it blurs and desaturates my photos… Time to put my sleuthing hat back on…