I had a different type of book post planned for today. It was going to be one of my regular recommended reading posts, filled with books that I have enjoyed in recent weeks. But then police officers in Minneapolis caused the unnecessary death of an unarmed black man named George Floyd, and the world erupted. Posting about the fiction I’ve been enjoying lately felt trivial compared to the painful reality so many people were living through.

In the weeks since Floyd’s death, I have kept silent in an effort to give those who are grieving more space to speak up for themselves and their communities. I’ve also used this time to try to learn about ways that I can personally be better and do better. I spent some time praying for ideas, and the answer came that I can educate myself and open my mind to the perspectives and experiences of those who don’t look like me.

So I took to Facebook and asked for book recommendations, and the response was overwhelming. I felt impressed to share the list here in case it could be helpful to anyone else. Because I’m still working through the list myself, I cannot speak to the content of many of the books and articles listed below. But it is my hope that as we all try to understand one another—especially those who have been marginalized by generations of hatred—we can build a society based on empathy, love, and acceptance.

Please note, this post does contain affiliate links. Normally, if you made a purchase through my link, I would receive a small commission at no additional cost to you. (Read my affiliate policy here.) However, any affiliate commissions I receive through this post will be donated to the NAACP to support their mission to “secure the political, educational, social, and economic equality of rights in order to eliminate race-based discrimination and ensure the health and well-being of all persons.” Learn more about their initiatives here.

The Fire Next Time
James Baldwin

A national bestseller when it first appeared in 1963, The Fire Next Time galvanized the nation and gave passionate voice to the emerging civil rights movement. At once a powerful evocation of James Baldwin’s early life in Harlem and a disturbing examination of the consequences of racial injustice, the book is an intensely personal and provocative document. It consists of two “letters,” written on the occasion of the centennial of the Emancipation Proclamation, that exhort Americans, both black and white, to attack the terrible legacy of racism. Described by The New York Times Book Review as “sermon, ultimatum, confession, deposition, testament, and chronicle…all presented in searing, brilliant prose,” The Fire Next Time stands as a classic of our literature.

White Fragility: Why It’s So Hard for White People to Talk About Racism
Robin J. DiAngelo

In this “vital, necessary, and beautiful book” (Michael Eric Dyson), antiracist educator Robin DiAngelo deftly illuminates the phenomenon of white fragility and “allows us to understand racism as a practice not restricted to ‘bad people’ (Claudia Rankine). Referring to the defensive moves that white people make when challenged racially, white fragility is characterized by emotions such as anger, fear, and guilt, and by behaviors including argumentation and silence. These behaviors, in turn, function to reinstate white racial equilibrium and prevent any meaningful cross-racial dialogue. In this in-depth exploration, DiAngelo examines how white fragility develops, how it protects racial inequality, and what we can do to engage more constructively.

Talking to Strangers: What We Should Know About the People We Don’t Know
Malcolm Gladwell

How did Fidel Castro fool the CIA for a generation? Why did Neville Chamberlain think he could trust Adolf Hitler? Why are campus sexual assaults on the rise? Do television sitcoms teach us something about the way we relate to each other that isn’t true?

While tackling these questions, Malcolm Gladwell was not solely writing a book for the page. He was also producing for the ear. In the audiobook version of Talking to Strangers, you’ll hear the voices of people he interviewed–scientists, criminologists, military psychologists. Court transcripts are brought to life with re-enactments. You actually hear the contentious arrest of Sandra Bland by the side of the road in Texas. As Gladwell revisits the deceptions of Bernie Madoff, the trial of Amanda Knox, and the suicide of Sylvia Plath, you hear directly from many of the players in these real-life tragedies. There’s even a theme song – Janelle Monae’s “Hell You Talmbout.”

Something is very wrong, Gladwell argues, with the tools and strategies we use to make sense of people we don’t know. And because we don’t know how to talk to strangers, we are inviting conflict and misunderstanding in ways that have a profound effect on our lives and our world.

In the Deep South of the 1950’s, a color line was etched in blood across Louisiana, Mississippi, Alabama, and Georgia. Journalist John Howard Griffin decided to cross that line. Using medication that darkened his skin to deep brown, he exchanged his privileged life as a Southern white man for the disenfranchised world of an unemployed black man.

What happened to John Howard Griffin—from the outside and within himself—as he made his way through the segregated Deep South is recorded in this searing work of nonfiction. His audacious, still chillingly relevant eyewitness history is a work about race and humanity every American must read.

How to Be an Antiracist
Ibram X. Kendi

Antiracism is a transformative concept that reorients and reenergizes the conversation about racism—and, even more fundamentally, points us toward liberating new ways of thinking about ourselves and each other. At its core, racism is a powerful system that creates false hierarchies of human value; its warped logic extends beyond race, from the way we regard people of different ethnicities or skin colors to the way we treat people of different sexes, gender identities, and body types. Racism intersects with class and culture and geography and even changes the way we see and value ourselves. In How to Be an Antiracist, Kendi takes readers through a widening circle of antiracist ideas—from the most basic concepts to visionary possibilities—that will help readers see all forms of racism clearly, understand their poisonous consequences, and work to oppose them in our systems and in ourselves.

Kendi weaves an electrifying combination of ethics, history, law, and science with his own personal story of awakening to antiracism. This is an essential work for anyone who wants to go beyond the awareness of racism to the next step: contributing to the formation of a just and equitable society.

Stamped from the Beginning: The Definitive History of Racist Ideas in America
Ibram X. Kendi

Some Americans insist that we’re living in a post-racial society. But racist thought is not just alive and well in America–it is more sophisticated and more insidious than ever. And as award-winning historian Ibram X. Kendi argues, racist ideas have a long and lingering history, one in which nearly every great American thinker is complicit.

As Kendi shows, racist ideas did not arise from ignorance or hatred. They were created to justify and rationalize deeply entrenched discriminatory policies and the nation’s racial inequities.

In shedding light on this history, Stamped from the Beginning offers us the tools we need to expose racist thinking. In the process, he gives us reason to hope.

Note: This one sounds like it has a very different tone than most of the others on this list. I included it because I think it’s important to remember that experiences and perspectives vary even across cultural groups. Developing empathy requires listening to a variety of voices.

Discrimination and Disparities gathers a wide array of empirical evidence to challenge the idea that different economic outcomes can be explained by any one factor, be it discrimination, exploitation, or genetics. This revised and enlarged edition also analyzes the human consequences of the prevailing social vision of these disparities and the policies based on that vision–from educational disasters to widespread crime and violence.

Just Mercy: A Story of Justice and Redemption
Bryan Stevenson

Bryan Stevenson was a young lawyer when he founded the Equal Justice Initiative, a legal practice dedicated to defending those most desperate and in need: the poor, the wrongly condemned, and women and children trapped in the farthest reaches of our criminal justice system. One of his first cases was that of Walter McMillian, a young man who was sentenced to die for a notorious murder he insisted he didn’t commit. The case drew Bryan into a tangle of conspiracy, political machination, and legal brinksmanship—and transformed his understanding of mercy and justice forever.

Just Mercy is at once an unforgettable account of an idealistic, gifted young lawyer’s coming of age, a moving window into the lives of those he has defended, and an inspiring argument for compassion in the pursuit of true justice.

Lena has her killer style, her awesome boyfriend, and a plan. She knows she’s going to make it big. Campbell, on the other hand, is just trying to keep her head down and get through the year at her new school.

When both girls attend the Friday-night football game, what neither expects is for everything to descend into sudden mass chaos. Chaos born from violence and hate. Chaos that unexpectedly throws them together.

They aren’t friends. They hardly understand the other’s point of view. But none of that matters when the city is up in flames, and they only have each other to rely on if they’re going to survive the night.

The Hate U Give
Angie Thomas

Sixteen-year-old Starr Carter moves between two worlds: the poor neighborhood where she lives and the fancy suburban prep school she attends. The uneasy balance between these worlds is shattered when Starr witnesses the fatal shooting of her childhood best friend Khalil at the hands of a police officer. Khalil was unarmed.

Soon afterward, his death is a national headline. Some are calling him a thug, maybe even a drug dealer and a gangbanger. Protesters are taking to the streets in Khalil’s name. Some cops and the local drug lord try to intimidate Starr and her family. What everyone wants to know is: what really went down that night? And the only person alive who can answer that is Starr.

But what Starr does—or does not—say could upend her community. It could also endanger her life.

Here are some additional reading/resource lists that were shared with me:

I would love to hear what titles you recommend for increasing our collective understanding of racism in the United States. Please feel free to share in the comments below.

How are you learning to understand the perspectives and experiences of those who are different than you? Consider taking time to write about recent events in your journal (here are some tips for how to do that) and really think about what you can do to develop greater understanding and empathy in your own life. 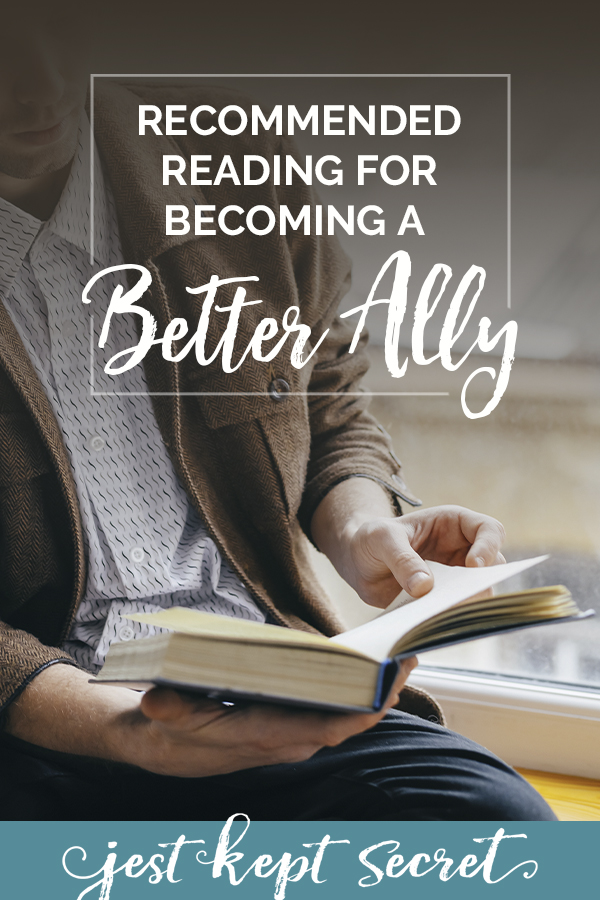