Ever the history nerd, Pompeii was on my list of The Top 5 Place We Have To See On This Trip Or Else. Much to my consternation, making that actually happen was more difficult than I expected…

These tiles held up the floors in many rooms. Something tells me this wouldn’t pass code today… 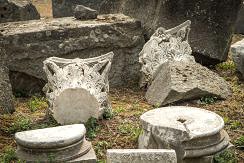 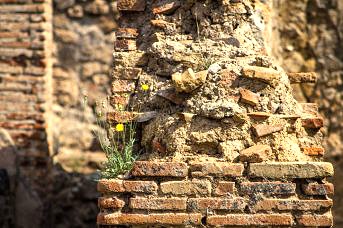 Despite being a huge draw for tourists, transportation to the city is extremely difficult. From Rome, it would have required 3 transfers (train and bus) and five hours of travel one way, and the trains are notorious for being late. We considered heading to Naples and finding transportation from there, but there wasn’t room in our itinerary for an extra day of just travel. So in the end, we booked tickets with a tour company that does day trips from Rome so we could just ride their bus for the 2 1/2 hour journey. 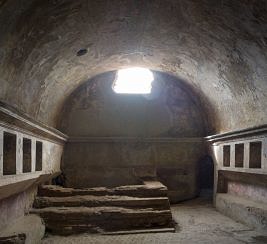 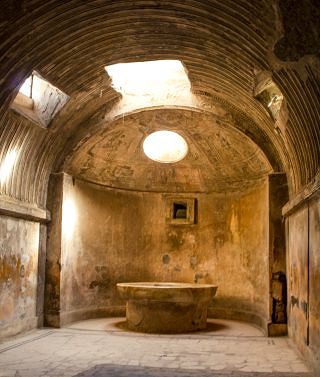 I want this in my house. 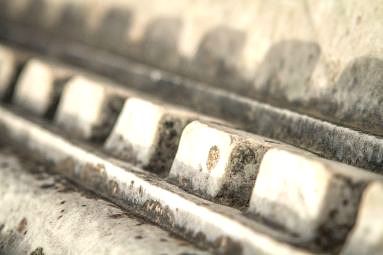 The drive down took us through some beautiful countryside, but the road was too bumpy to really get any decent photos. But the mountains were beautiful and the villages were lovely, so it was an enjoyable ride.

Leslie: The drive here was fantastic for getting views of Italy we otherwise wouldn’t have seen. 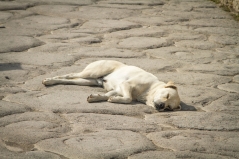 Pompeii is home to a small population of stray dogs. Who knew?

These raised paving stones were designed to keep pedestrians up out of the muck on the streets while still allowing chariots to pass along the roads. 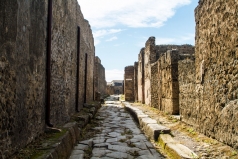 Many on the bus had also booked the optional guided tour, which was €37/person. The tour guide kept trying to upsell the rest of us, but Leslie and I felt pretty confident we could manage fine on our own. Signora Tour Guide also told us that if we didn’t book a tour with her, we would have to wait in line for an hour before we could even get into the site. She also told us that there were no free bathrooms inside the gates, so if we didn’t want to pay 50c to use the loo, we should follow her to the cameo factory, where we could use the toilet for free in exchange for watching a “short” video about their cameos. We didn’t have to buy a cameo, but if we did, you know, happen to want to buy one, theirs were the cheapest.

Lies. All lies.[1] We got in within 10 minutes, found free water closets just fine, and we’re pretty sure somebody was getting a kickback from the cameo company. 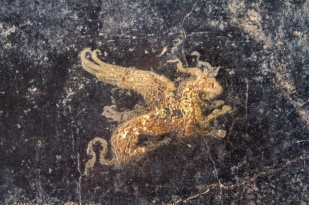 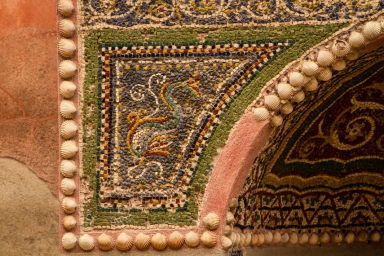 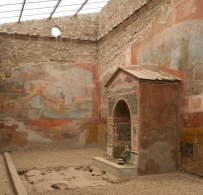 This was the most ornate mural we saw. Isn’t it gorgeous?

While it was nice to just wander on our own, we learned very quickly that having a tour guide actually might have been the better way to go. The site is huuuuuuge, and there are no maps to take when you get your ticket.

Leslie: And without a map, we apparently didn’t see some of the most iconic parts of the city. So definitely download your own map when you have wifi, and print off some history to read while walking around.

If you’re planning a trip to Pompeii, here is a useful map I discovered afterwards. 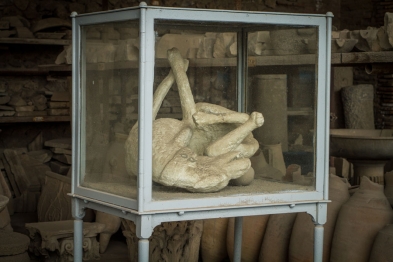 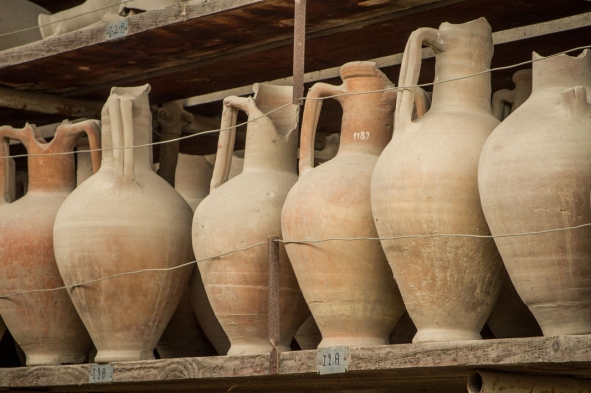 There also weren’t very many signs to tell us what things were, which is why the photos in this post aren’t really in any sort of an order. Our experience of Pompeii was really just one of aimless wandering and seeing what details we could spot. I would have enjoyed knowing what things actually were, but in a way, it was kind of fun to try to figure it out for ourselves. It was easy to imagine what it might have been like to be the first archaeologists to visit the site.

Leslie: I sure wish we had known beforehand to expect no signs or information. I love to read the history as I’m experiencing a place, and that was missing here. Looking up the history afterward wasn’t the same. It was still incredible to see evidence of this once thriving metropolis in ancient Rome with various sizes of houses, temples, thermal baths, gardens, mosaics and paintings and sculptures. It’s amazing to see what has been uncovered and what survived the tragedy. I wasn’t aware that it is currently an active archeological dig site still, and you can see everything they’ve uncovered in one part of the city…shelves and shelves holding pieces of ancient everyday life like dishes, pots, vases, etc. 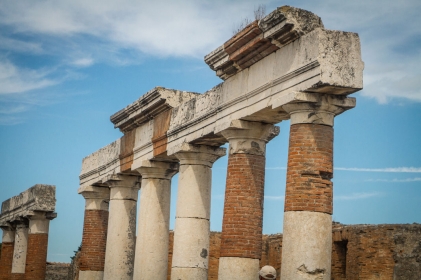 The ruins in the foreground are the Temple of Jupiter. The mountain in the background is the one who caused this whole mess. 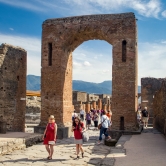 One of the few places with good signage was the forum area, which is home to public administration buildings, a basilica, and temples dedicated to Jupiter and Apollo. This wide open place was a meeting spot for many tour groups, so we got to eavesdrop on a couple of English-language tours that were regrouping after breaking for lunch. 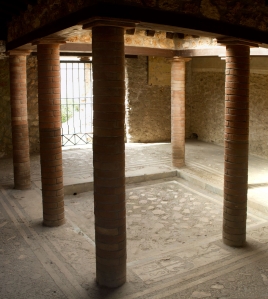 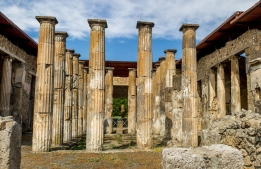 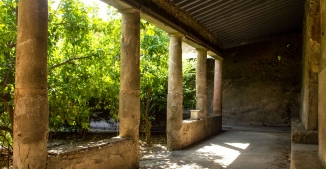 This one was my favorite

There are many things about ancient Pompeiian culture that I can’t get on board with (let’s just say that Vesuvius may have been the AD 79 Italian version of the Biblical flood’s cleansing of the earth…). But when it comes to architecture, the Pompeiians and I are definitely on the same page. They sure loved their courtyards, and I loved seeing them all. Seriously, every single house had one. My favorite is currently filled with lush green plants—a veritable jungle in the middle of a ruined house. *swoon* I’m signing a lease next week. 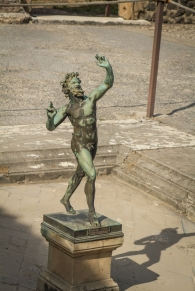 I am too fabulous for clothes. 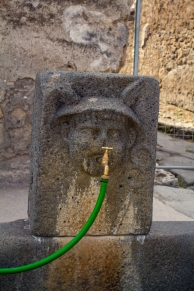 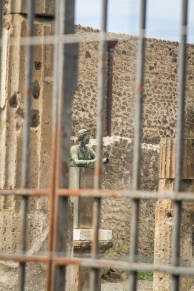 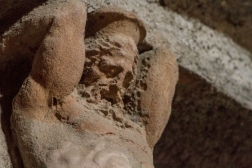 Don’t you just want to tickle him and see what happens? 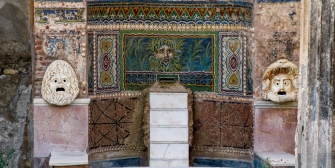 But the statues took the cake for Favorite Things About Pompeii. You guys know that I have a thing for sassy and expressive statues, and Pompeii has them in spades. Thankfully, we missed the (*cough*) inappropriately expressive statues that Pompeii is known for, and the ones that we saw were just entertaining enough. The one I’ve labeled Shock and Awe in the gallery above still makes me laugh out loud every time I look at it.

After a long day of exploring, we met our bus buddies in the market outside the gates and headed back to Rome. Despite it being excessively difficult to get to the city, Leslie and I agree that it was a fun day trip and totally worth the effort it took to get there.

[1] Hence why I am not divulging the name of the tour company.