I have been looking forward to the past two weekends for months now, and they definitely didn’t disappoint.

First was the Convention of the North 2, a conference for YSAs from across the British Isles hosted by the Sunderland stake. We have been planning it for months, so it was fun to see it all come to fruition. We had a carnival themed dance, party bus, kayaking, canoeing, rock climbing, archery, a cooking class, paintballing, a service project, a devotional with a General Authority, a beach party with delicious “mocktails”, and a fantastic set of workshops on Sunday. I didn’t meet many new people, but I had a lot of fun regardless and came home feeling uplifted and inspired.

One of the girls from my Sunday School class held a bake sale fundraiser for the Make-A-Wish Foundation. She raised about £230 ($358)! Way to go, Helen! 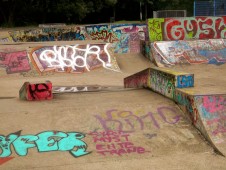 I’m not a skater (too clumsy), but I do kind of have a fascination with graffiti. Weird? Maybe. But I’m a sucker for colorful places.

My long term career goal is to work with kids in an agricultural setting. (Yes, I even want to tie that in with food security.) So when my research partner Amelia asked me to help teach 76 10-11 year olds about farming, I was super excited! I got to teach them about plant food and talk about the difference between organic and conventional fertilizers. What a riot!

While I didn’t pair up with anyone at the convention, I did come home with a box of the prettiest pears I’ve ever seen. 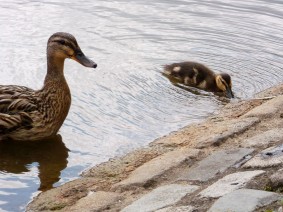 I was so excited about spring time at the duck pond and all the ducklings and goslings and cygnets that were sure to appear. But after all that waiting, there was only one. One little tiny duckling, all by himself. 🙁 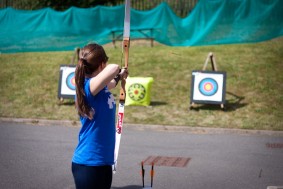 Day 2 of the Convention included a variety of fun activities. I opted for a visit to the Sunderland Marine Centre, where we got to shoot stuff with arrows and paddle around in kayaks. That afternoon, we had a great devotional with Elder Dryden of the Area 70, who spoke about making the Sacrament more meaningful, and the evening ended with a fantastic party at the beach! 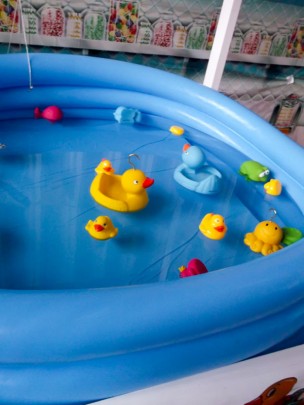 This weekend, the Sunderland Stake hosted a convention for YSA from all over the British Isles. We had over 200 people attend! The first night was a carnival themed “dance” (I use that term loosely, since most people didn’t dance) with games like Hook-A-Duck and Coconut toss, a fantastic photo booth, a tuck shop selling sweets to benefit a charity called Chipchase House, and the best candy floss (cotton candy) I’ve EVER had. What a fun night!

Next was the Sunderland International Airshow. I love planes and helicopters, and it was a lot of fun to see so many of them. There were trick planes, the best paratrooping unit in the world, military jets, and planes that spewed fireworks as they flew past! They even staged a beach invasion to demonstrate how the Royal Marines would take back British shoreline that had been captured by renegades. There were explosions and gunfire and helicopters dropping soldiers on the beach, and it was all very exciting. I’ve got lots of pictures to share soon!

This bear has been in the office window all year. It never ceases to make me laugh.

For the next few weeks, the city council is hosting open-air movies at Gray’s Monument in town. I wish I had known about it before this–they were showing “Guardians of the Galaxy” here, and I still haven’t seen it!

In an effort to declutter and get ready to send my stuff home, I sorted through all my notes from the year and took pictures of every page so I could get them organized digitally. This is only about a 3rd of the pile…

I live near an Army Barracks, and one of the helicopters used during the airshow must come from there. After taking off, it hovered over our flat for a good 20 minutes before flying off to Sunderland. 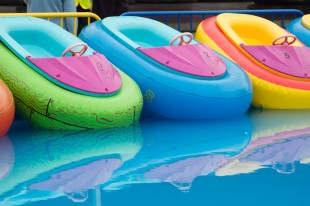 I went to the Sunderland International Airshow with some YSA friends on Friday night. There was also a fun fair, so we got our own little taste of G-forces by trying out some of the rides. 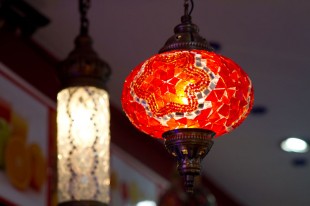 There is a new Turkish restaurant in Grainger Market, and I LOVE their lamps! 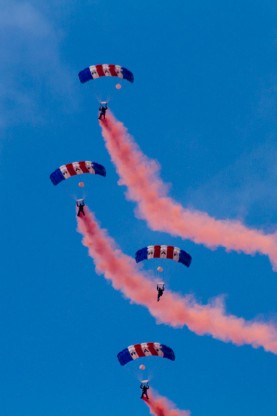 These paratroopers are the best in the world! There are 9 men on the team, and they did some pretty impressive acrobatics between the plane and the ground!

With only a few weeks left before my time here is finished, I’m going to make the most of it. I have a to do list of things I want to see before I leave. Just gotta get that dissertation finished and then I’ll have more time to play before I have to go back to the real world.