Exploring the Rock of Cashel

Because train travel isn’t quite as cheap and convenient in Ireland as it is in other parts of Europe, Leslie and I decided to rent a car. After picking up our little Ford Fiesta from the rental office in Dublin, we headed southwest to the town of Cashel, a teeny little hamlet surrounded by rolling green hills and narrow, windy roads. We got to know those windy roads really well before we realized that the GPS was set to avoid toll roads, and we had been sent an hour out of our way. But when you’re surrounded by such beautiful countryside, detours aren’t disasters.

Our destination in Cashel was a ruined castle called Carraig Phádraig or the Rock of Cashel. While the oldest surviving structure on the hilltop is a round tower built c. 1100, legends from as far back as the 5th century make reference to the iconic fortress. Many of those legends center upon St. Patrick (hence the Phádraig in the site’s Irish name), including one that says that the Rock originally sat on a mountain 20 miles away. But when St. Patrick kicked the Devil out of a cave, the Rock was dislodged and landed in Cashel.

That St. Patrick must have played some mean football.

It was kind of a dreary day, but it just made the ruins feel even more rugged and wild. The roof of the cathedral were removed in 1749 by Arthur Price, Archbishop of Cashel, so much of the nave is open to the elements.

Leslie says: “I really liked this one; the castle itself was so ancient that parts were pretty run down, but the details in the stone work and even the small portions of murals that were still visible were neat.”

There was a little museum where we watched a movie about the history of the castle. It was originally the seat of the Munster Kings, but the site was donated to the Roman Catholic Church in 1101. It was also the site of a massacre in 1647, when Irish Confederate troops and the resident clergy were all killed and many artifacts were destroyed. Despite the ransacking, English historian William Howitt suggested that the Rock of Cashel may be one of Europe’s best collections of Celtic art and medieval architecture.[1]

The cemetery was full of both ancient and modern headstones. The Celtic crosses were especially lovely with their intricate knots overgrown with moss and lichen. The most impressive was the huge Scully’s Cross, which was built in 1867 as a memorial for the Scully family. In 1976, the top part of the cross was destroyed by lightning, and the broken pieces are still scattered across the lawn.

Leslie says: “I loved the view from the castle to the surrounding area. This was kind of our first glimpse of just how green and lovely Ireland is. And being up on the hill was an awesome viewpoint of the countryside.”

The Rock of Cashel has been called a jewel among historical Irish structures, and after spending a morning there, it’s easy to see why. It’s a gorgeous ruin, and well worth the extra hour of driving it took to get there.

Edit: I totally just found a bunch more pictures of the Rock of Cashel that I’d somehow missed when I first posted this. So here are a few more for you to enjoy.

Planning a trip to Ireland? Don’t forget to add the Rock of Cashel to your itinerary! 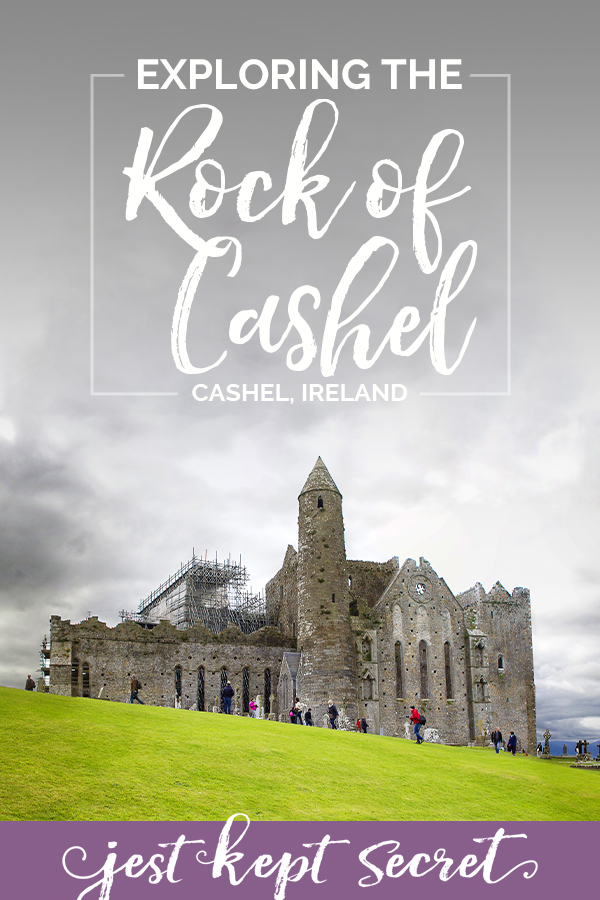