I had been wanting to go back to Portugal ever since I left. For being a country that wasn’t ever really on my bucket list, it sure did enchant me. Add in the fact that Leslie speaks Portuguese, and it was a no brainer that Portugal would be on our itinerary.

Leslie: I seriously didn’t need to speak Portuguese hardly at all while we were here, haha! The Portuguese obviously get much better schooling in English than the Brazilians do…

So after our brief stint in Paris, we headed to the Charles de Gaulle airport to catch a flight to Lisbon. We arrived late on Saturday night, so our first glimpse of the city was when we left for church the next morning. 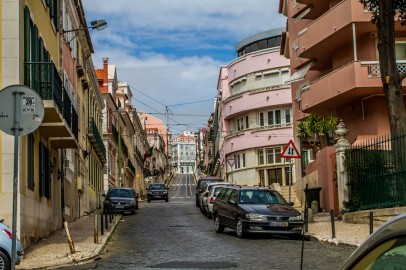 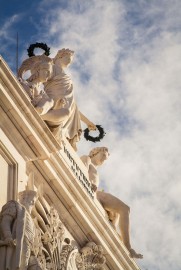 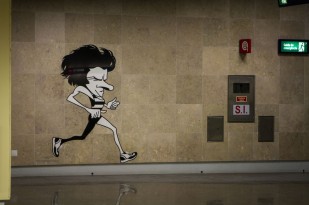 From our hostel, we walked down a street paved with mosaic tiles to Praça do Comércio, where we tried to figure out how to catch the bus to the chapel. In exchange for a few euros, an elderly homeless man with no teeth pointed us toward a bus stop across the square and around the corner, but when we followed his directions, we found no bus stop. Turns out, the bus stop where we were when the man offered to “help” was actually where we needed to be…

Leslie: And then, the first bus never came, the second bus didn’t stop because we didn’t flag it down, and the third bus didn’t stop even after being flagged down. We eventually decided to just pay for a taxi so we wouldn’t be late. Thankfully the taxi was lots cheaper than I expected. It was slightly aggravating at the time, but it’s a funny story in hindsight. 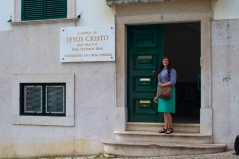 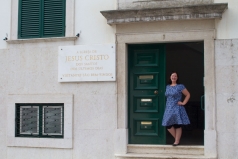 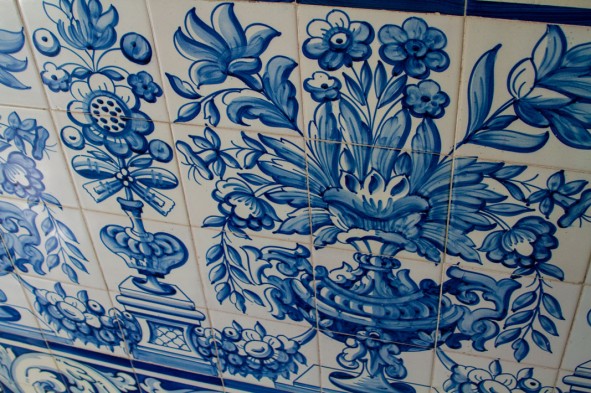 We arrived safely at the chapel and enjoyed a lovely couple of hours with the people of the Lisboa 1st Ward. The building is a three-story former house, and the interior walls are covered in Portugal’s famous azulejos (blue tiles). It was gorgeous!

Leslie: I LOVED this tiny ward; something about listening to European Portuguese accents, hearing the gospel taught in a language that is dear to my heart, seeing the progress being made in the missionary work despite the fact that so many missionaries were serving in one small ward because of the likely huge geographical region the ward covers, how welcoming the members were even when they could only smile, the handful of older members who unexpectedly knew some English…it was all just so lovely to me.

I was grateful for Leslie’s Portuguese skills as she translated the talks and lessons for me, but probably not quite as grateful as the young Chinese girl and her mother who were also visiting that day. The girl was no more than 16 or 17 years old, and she was moving to Lisbon to attend the Royal Academy of Dance. Her mother was just there to help her get settled in, and then this girl would be on her own.

And she didn’t speak a word of Portuguese.

She spoke a little English, though, so the Relief Society president asked if Leslie could translate for them as they tried to figure out how to help the girl get settled in. It was so fun to feel like we were in the right place at the right time.

Leslie: I enjoyed feeling like I could be of service by translating for that cute, terrified girl until we got the missionaries involved. Isn’t it cool that you can find brothers and sisters anywhere in the world, simply by showing up at church? 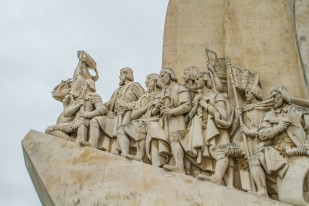 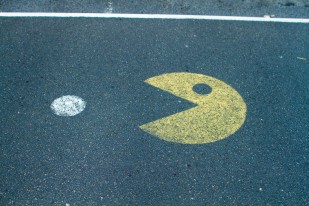 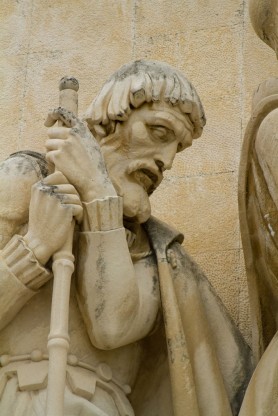 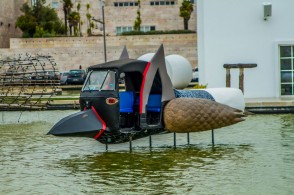 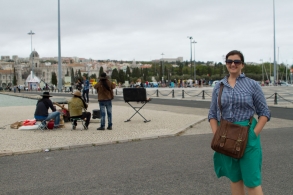 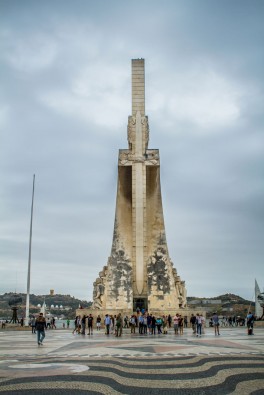 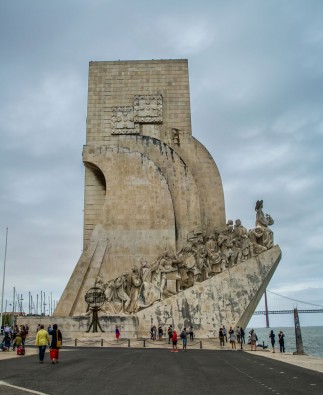 After church, we took a lovely walk around the historical district known as Belém. Belém is home to the impressive Padrão dos Descobrimentos, or Monument to the Discoveries, which was erected in the late 1950s to commemorate the great Portuguese explorers of the 15th and 16th Centuries.

Leslie: The monument was pretty cool; I enjoyed that it was shaped like a ship, with its nose pointing out toward the river, and it was fun to study the sculpted early navigators climbing the sides, holding different objects to symbolize discovery and exploration. Also, I remembered a teeny bit of my Portuguese History class so I recognized the name Henry the Navigator, the man at the point, and it was fun to try to picture which statue was Vasco de Gama, Ferdinand Magellan, or Pedro Alvares Cabral. But I think, more than the monument itself, I enjoyed the feel of the whole plaza: the beauty of the large compass rose on the walkway with the map in the center, and the wind blowing in off the river, the Bolivian pan pipe band. Haha, so fun! It was just easy, relaxing, lovely weather… perfect for a Sunday afternoon walk. 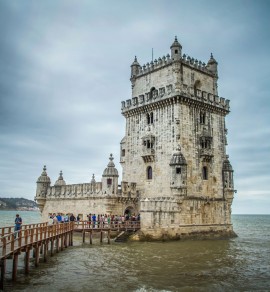 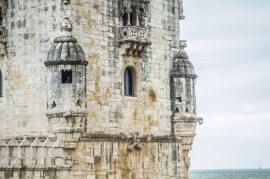 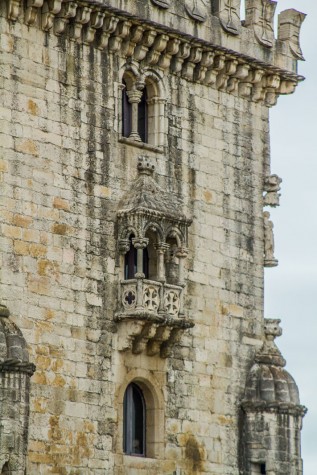 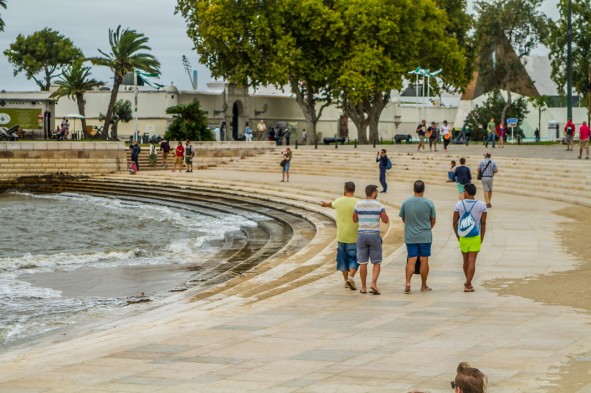 It’s also home to the Tower of Belém, a fort built in the early 16th century. Two matching forts were built on the opposite side of the Rio Tajo, and between them, they had enough firepower to prevent enemy ships from advancing up the river. Thanks to the nation’s intrepid explorers, Lisbon had become one of the world’s premier centers of commerce, and King Manuel I wanted the tower built to assert his power. We didn’t go inside, but there were billboards along the riverwalk that talked about the history of the tower, so we got a fun little history lesson for free.

Leslie: Maybe I’m a nerd, but I love when places give you historical information to soak up while you’re visiting a place of historical importance. Without the information, I feel like I’m missing out on the purpose and the stories behind it; I am always curious as to why it was built, what was the intended purpose, how long did it take to construct, what was it actually used for, etc.etc. I also really liked the architecture of the tower. It was prettier than I would expect from part of the river’s main defense system, and the details in all the stonework were pretty great. 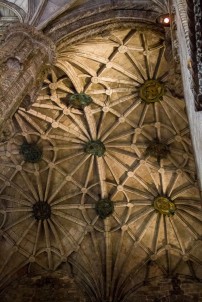 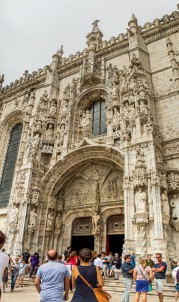 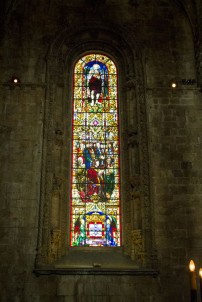 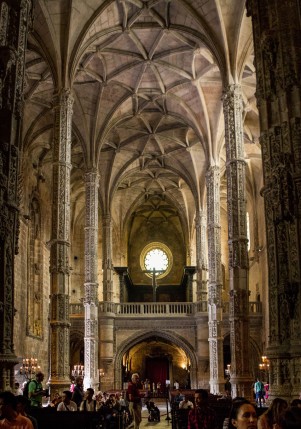 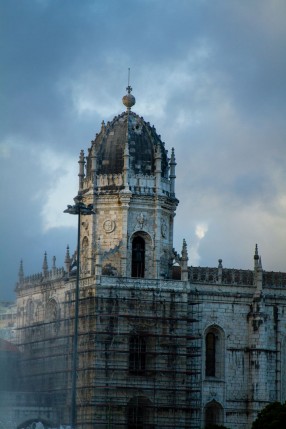 When we first arrived in Belém, we wandered through the incredible Mosteiro dos Jerónimos (Jerónimos Monastery) and learned that they were hosting a free organ concert that evening. We decided to come back after our walk along the river to enjoy the music.

Leslie: I remember being kind of blown away by the scale of this monastery; it was soooo long! The Gothic style architecture, while not my favorite, is pretty impressive in it’s detail and ornateness. I thoroughly enjoyed the free organ concert—what a treat to find a free activity to fill our Sunday evening! The organist was pretty amazing.

He definitely was. Did you know that an organ can sound exactly like a bunch of real birds tweeting? No? Neither did I, but apparently, this organist did. It was super cool, especially in such a beautiful setting. I wish we had gotten a recording of it, because I can’t find anything like it online. 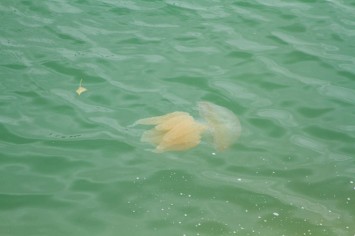 Jellyfish. Jelly fish. Hear the difference? It’s subtle, but it could save your life.

I promise you, this isn’t San Francisco. 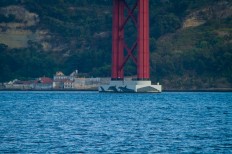 One of the other pylons had Orcas on it. 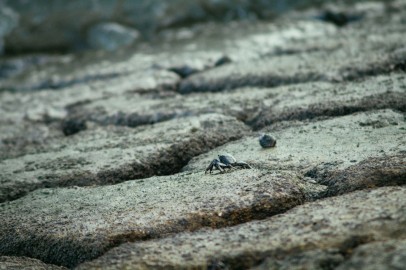 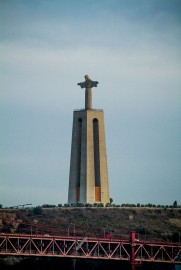 This is the National Palace of Belém and official residence of the President.

After the organ concert, we wandered down the river to catch a better view of the 25 de Abril Bridge, which looks a lot like San Francisco’s Golden Gate Bridge, and the Cristo Rei statue up on the hill. We also found the National Palace of Belém.

Leslie: I think it’s rather funny that the official residence of the Portuguese President is pink, haha. And not only that, but that it was so close to the sidewalk in a seemingly busy part of the city. It’s nothing like the White House, with acres of land between it and where tourists can walk.

The next day would bring one of our favorite adventures of the entire trip. Stay tuned for magnificent Sintra and the Pena Palace.