Florence and the Machines

Okay, okay. I’ll admit it: I’m a little too proud of the title of this post. (If you don’t get it, I’m so so sorry. But you should listen to “Too Much is Never Enough” right now because it gives me chills. “Wish That You Were Here” is also pretty spectacular.)

So, FLORENCE. Florence was A. Maz. Ing. Leslie and I are both in agreement that this was one of our favorite parts of the trip.

We started the day at San Lorenzo Market, a really fun street market our hosts, the Evertsons, had recommended. I didn’t get any pictures, but I did get some sweet swag—beautiful Italian silk ties for my dad and brothers-in-law, the softest Italian leather gloves for my Mom, and a leather-bound journal for myself. I practiced my haggling skills a little more with the journal and did infinitely better than I did in Paris. But the most entertaining haggling of the day was when a leather merchant tried to talk Leslie into buying a coat for €250. He said he could cut her a deal (“Because I like you,” of course) for €190.

Leslie: San Lorenzo was such a great suggestion from the Evertsons. I loved looking through everything leather, and the silk ties. If I had more room in my bag, I would have bought ties and purses to bring home for everyone from here because they were beautifully made and such reasonable prices. I had fun shopping here, and you know that I loathe shopping, generally. 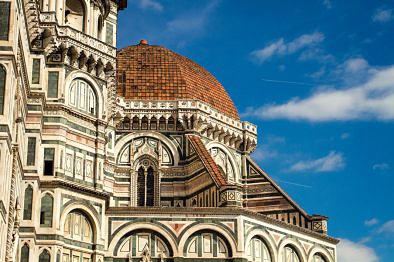 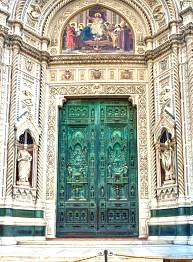 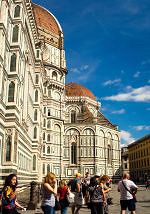 From there, we headed over to Cattedrale di Santa Maria del Fiore, otherwise known as Il Duomo di Firenze, otherwise known as Florence Cathedral. We wanted to go in for a tour, but it was temporarily closed for Mass, so we admired the outside for a while first. Like the Duomo in Milan, the Duomo di Firenze is enormous. I loved that we could be walking down a side street and catch a glimpse of the Duomo up at the other end, pretty much no matter where we were in the city.

How would you liked to come up against one of these bad boys in battle? 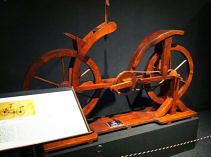 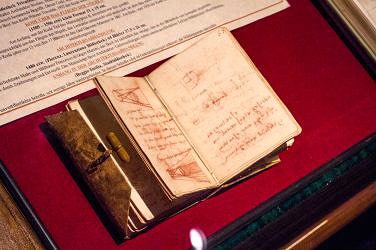 Definitely did some fan girling over this artifact. 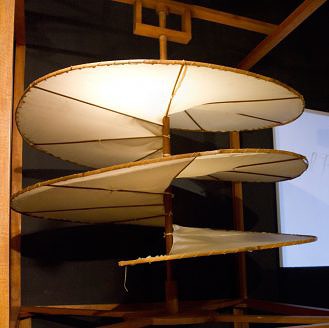 The Air Screw was a prototype helicopter designed by da Vinci. You can watch a video of some modern engineers trying to make one fly here. Fair warning, though: don’t watch it if you get motion sickness… 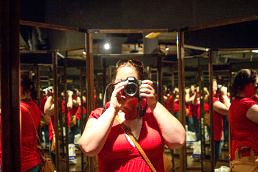 I don’t remember how da Vinci was connected to a room of mirrors because I was too busy taking a selfie to read the sign. 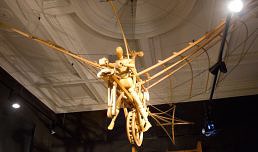 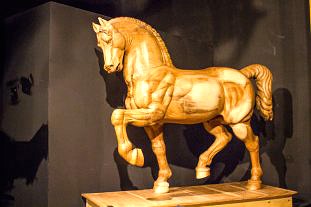 This is a model of my absolute favorite piece of work by da Vinci—well, sort of. Da Vinci was commissioned by the Duke of Milan to create a monument to his father. Da Vinci designed what would have been the largest horse statue in the world if it had ever been completed. His first clay model was destroyed when French soldiers invaded Milan in 1499, and the project was abandoned. Modern sculptors have created several horses from da Vinci’s drawings, and they are much, much larger than this one. (Source: Wikipedia) 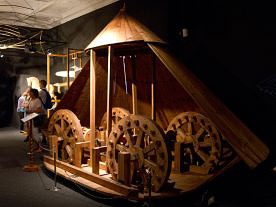 While we waited for the Duomo to open after Mass, we went to the nearby da Vinci museum. I’ve been a fan girl of  da Vinci pretty much my whole life, so I was like a kid in a candy store. They had miniature and life-sized models of many of his inventions, and most of them were set up so you could play with them! And I knew that da Vinci invented a gazillion cool things, but there were things there that I’d never heard of before. Signore da Vinci was a seriously cool dude.

Leslie: I would highly recommend the da Vinci Museum, too. I found everything about this museum to be charming: the little side-street it was on, the interactive exhibits, the explanations of the math and science and thought behind each inventions, even the gift shop through which you enter and exit with unique things like the postcards that turn into paper models of da Vinci’s inventions. I was pleasantly surprised by how much I loved this museum! 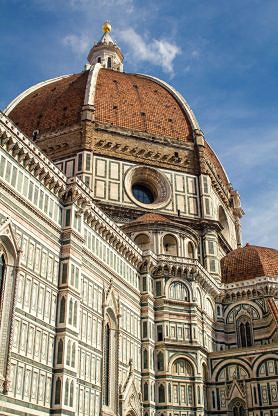 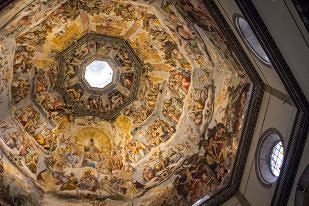 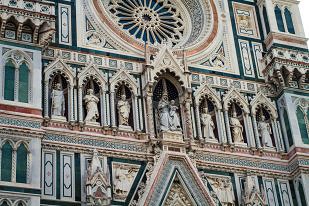 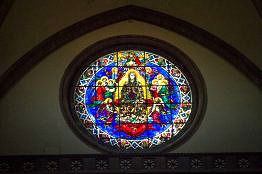 Our timing was perfect, and by the time we were done at the museum, Mass was finished and we got to visit the Duomo. The ceiling alone was worth the wait—it was absolutely incredible. The floor was pretty spectacular, too, and we really enjoyed it all. 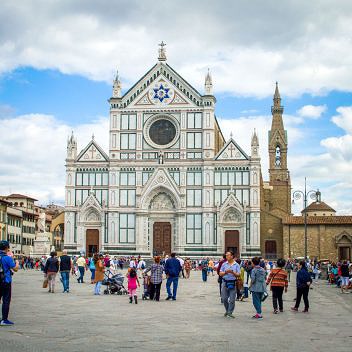 Although construction on this church was completed in the 14th century, the exterior remained unadorned for several hundred years. Finally, in 1857, architect Niccolò Matas was commissioned to design the facade. As he was Jewish, many believe that the blue Star of David near the peak was a nod to his own religion, although there is no evidence to substantiate that theory. (Source: The Florentine) 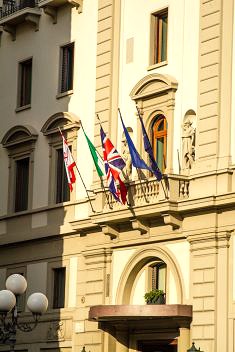 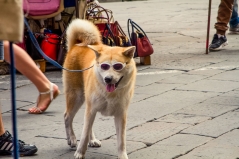 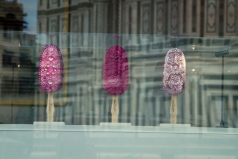 These are rhinestone-encrusted Magnum ice cream bars. Yes, you read that right. 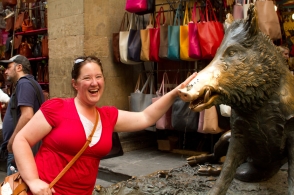 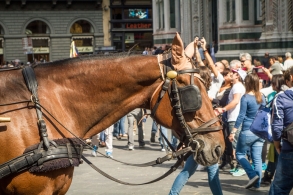 We got lost (intentionally) after that and just wandered the city at our leisure. It was nice to see so many amazing things without feeling like we had to stick to a schedule. We just enjoyed the city and took breaks to people watch whenever our feet got a little achy.

Leslie: I really loved Florence! And I think a big part of that was that rather than cramming our time with museum and cathedral visits and whatnot, we spent more of our time wandering and exploring, people watching, and enjoying being outside exploring and taking in the beauty of the city.

We also found Il Porcellino, a brass fountain shaped like a boar. We had read beforehand that if you rub the snout of the boar, it’s supposed to bring you good luck—so guess who rubbed the snot outta that snout? HA! (I’ve since read[1] that you’re actually supposed to put a coin in the pig’s mouth and let it roll into the grate between it’s feet. That brings the good luck. Then you rub the snout to ensure you’ll come back to Florence someday. So I may not have much luck, but at least I’m going back to Italy before I die!) 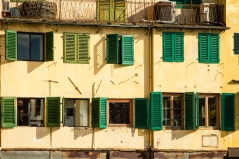 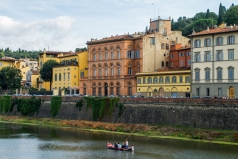 We wandered down to the Arno River to see Ponte Vecchio, a medieval bridge lined with shops. It was super crowded and we had to wait a while to get a good view and snap some pictures, but it was really cool. 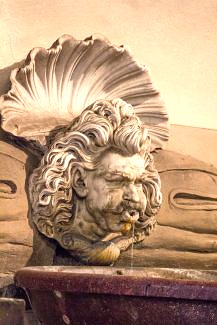 From Museums in Florence: “The Fountain of Neptune, nickname Biancone, situated beside Palazzo Vecchio. This work by Bartolomeo Ammannati (1563-1565) and some assistants, such as Giambologna, was commissioned on the occasion of the wedding of Francesco I de’ Medici with grand duchess Johanna of Austria in 1565. The assignment had first been given to Baccio Bandinelli, who designed the model but he died before he could start working on the block of Apuan marble. The Neptune figure, whose face resembles that of Cosimo I de’ Medici, was meant to be an allusion to the dominion of the Florentines over the sea. The figure stands on a high pedestal in the middle of an octagonal fountain. The pedestal in the middle is decorated with the mythical chained figures of Scylla and Charybdis.” 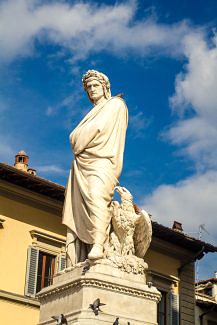 Dante looks like he thinks this toga party is pretty… hellish. (Sorry not sorry.) 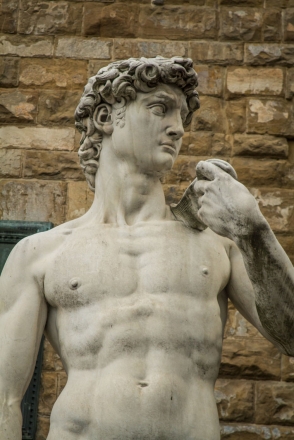 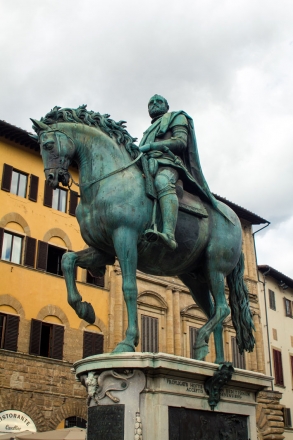 Thankfully for the rest of us, Florence has had no shortage of creative geniuses like Signore da Vinci. Leonardo and his pubescent terrapin comrades, Michelangelo, Donatello, and Rafael, all called Florence home during the Renaissance, as well as many, many others. Much of their work has been collected at three museums in Florence: the Uffizi Gallery, the Galleria dell’Accademia, and the Bargello. They are all fairly expensive to visit, so we opted to just enjoy the sculptures and statues in and around the Piazza della Signora. Many of these are replicas of what you’d pay to see inside the museums, including one of Michelangelo’s David. I had no idea how tall he was—17 feet! He was pretty impressive.

Leslie: We may have missed out on some great art at the Uffizi or the Academia, but I’m glad we took a more laid-back approach and just got to see the city. 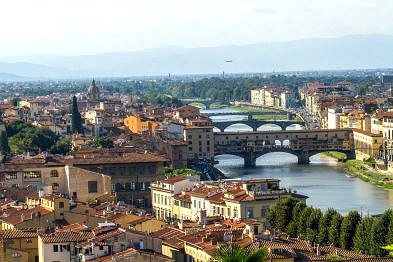 The best view of the Duomo is the definitely from the Piazza Michelangelo. It’s the only way to get a picture of the whole thing! 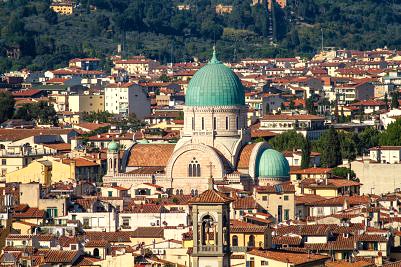 This is a synagogue built by Italian Jews during the 1800’s.

Our time in Florence coincided with the weekend, so we went to church on Sunday with the Evertsons, who are also LDS.

Leslie:  I enjoyed meeting all of the Americans that were at church in Florence for various reasons: studying abroad, missionaries, travelers like us, etc. Hopping in amongst other ladies to help with the after-church lunch made me feel at home, too.

After church, we did a little more exploring and headed up to the Piazza Michelangelo (Leslie:  Yet another excellent suggestion from the Evertsons), which has the best panoramic views of the city. We could see the Duomo and the Palazzo Vecchio and the Tempio Maggiore Israelitico di Firenze, a Jewish synagogue with a lovely green dome. There were also several painters and sketchers up there, and it was fun to peek at their work as we walked past.

Leslie: Piazza Michelangelo was just relaxing and lovely. The views of the city and Ponte Vecchio were gorgeous.

Leslie: All in all, I felt like Florence was the perfect “breather” before heading to Rome. It felt like a comfortable and sleepy city and I loved it!

Where We Stayed: Evertson Family

Our hosts in Florence were a family Leslie connected with on Mormon Explorer, which is like Air BNB or Couch Surfing for LDS travelers. It hasn’t taken off as well as those other sites have and most of the profiles are now defunct, but we lucked out with this one. They were actually American expats with six kids, and they had been living in Italy for about 6 years. It was really fun to get to know them while we stayed there.

Leslie: it was fun to stay with an LDS family and get a feel for their life abroad. How cool that their youngest girls were born and raised in Florence and are bi-lingual! It was also extremely convenient to have a ride to church rather than the convoluted bus hopping it would have taken us to get there.