It’s no secret that I loved the Newcastle Ward. It is full of many of the kindest, most genuine people I have ever known in my life.

It’s also full of goofballs, like my pal Bro. Hancock. (And yes, he’s kind and genuine, too. Just always good for a laugh.)

When Bro. Hancock discovered my love of England, history, and castles, he organized a grand adventure that would fit all three. So it was that about a week before I left Newcastle, I took a break from my dissertation and ventured forth to a town called Barnard Castle with him, his lovely wife, and a missionary couple from Utah, the Marshes.

Before we reached Barnard Castle, we made a quick detour to the ruins of Egglestone Abbey, a 12th century Premonstratensian monastery on the banks of the River Tees. Like my favorite ruin in Ireland (Bective Abbey), Egglestone is a great place to climb about and explore.

Bro. Hancock grew up nearby, and he has a great understanding of the history of the area. He explained that the Abbey was disbanded in the 1500s by King Henry VIII, who didn’t like the fact that the Catholic Church wouldn’t annul his marriages and so had all the monasteries closed. After that, Robert Strelly converted the Abbey into a house, although there is no trace of it now. Bro. Hancock also showed me where the kitchen staff got their water—and how it was directly beneath where the room staff emptied the chamber pots.

No wonder they didn’t live very long back then…

After that, we took another quick detour to peek at the Bowes Museum. We didn’t have time to take a tour, but we did enjoy the gift shop (where I added a few new specimens to my postcard collection) and the spectacular grounds. The Bowes Estate has quite a colorful history, and today, it houses a large collection of art. One of its most famous pieces is a silver swan automaton that preens its back and fishes for its supper every day at 2:00. That would have been worth seeing. Guess I’ll just have to go back.

When we finally reached the town, Bro. Hancock took us on a little tour of his old stomping grounds. We saw the house where he grew up, ran into a bunch of people he knows, and enjoyed lunch at a chippy called Fryer Tuck’s.

The town of Barnard Castle is home to a castle.

Bet you can’t guess what its name is.

Barnard the Castle is an 11th century castle built by Guy I de Balliol, a Norman Baron who supported King William in Normandy. It fell into ruin when it was sold, along with Raby Castle, to Sir Henry Vane, an MP who apparently liked to make enemies in the House of Commons. When he decided to turn Raby into his primary residence, the masonry at Barnard was pillaged to make repairs.

Welcome to my castle. It was built with the guts of another castle because I’m rich.

Before heading home, we took a short walk along the River Tees to a lovely blue bridge that gave us a great view of the castle by the river.

And goodness, these pictures are making me miss England…

I think it’s time to go back.

Planning a trip to England? Save this for later! 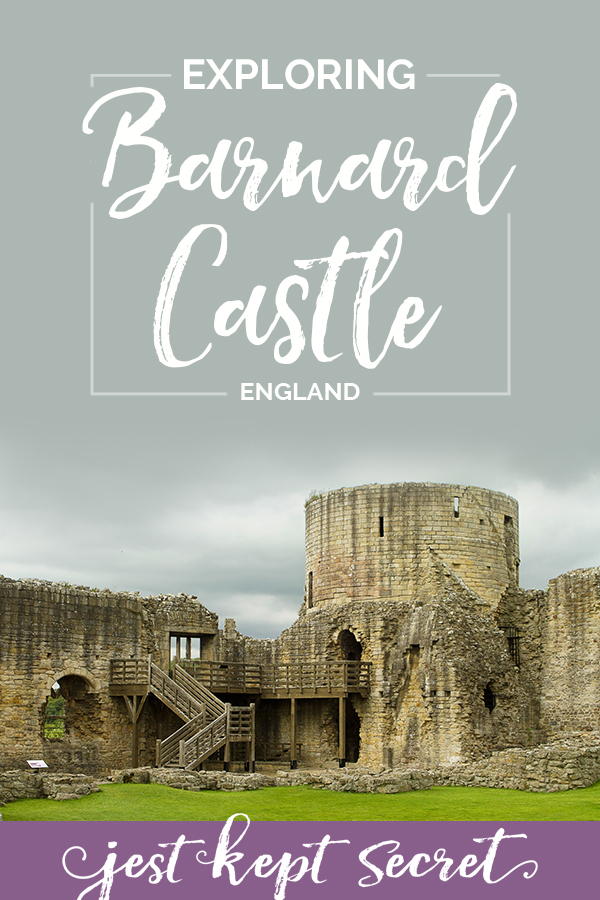