It’s hard to believe, but Brett and I are coming up on our second anniversary. It has been a fabulous two years, and I’m looking forward to many, many more.

When we were first married, our finances made it difficult for us to go out very often, so date night was often spent playing games at home. We also really love playing games as part of Family Home Evening. While there are some card games that work well with two players, there are fewer board games that don’t need four or more people to play. (That should be a good excuse to invite another couple over to double with us, but we’re both introverts, so it hasn’t happened yet…) Thankfully, some very thoughtful friends gave us some fabulous two-player games as wedding gifts, and we both brought a few to the game table ourselves.

If you’re a couple sans kids or acquaintances to play with—or, if you’re looking for a great wedding gift for a couple soon to tie the knot—here are ten awesome games that are perfect for two players.

I actually haven’t played Azul with Brett yet, but I played it with friends when I went down to UT for Pioneer Day and I’ve been eager to add it to our collection ever since. With artwork based on the azulejo tiles of Portugal, Azul is both visually appealing and fun to play. Each player tries to be the first to fill up a row or column in their tile repository by collecting groups of matching tiles—but since there are lots of opportunities to earn points, crossing the finish line first isn’t a guarantee that you’ll win. It moves very quickly: the whole game can be completed in about  20 minutes, making it easy to play several rounds or getting you warmed up for other games. I also just learned that there’s a sequel to Azul called Stained Glass of Sintra and I would love to try that one, too!

Bold is a matching game for big kids. Instead of just trying to match identical images, you can match cards that share the same color, size, icon, or pattern. If you successfully make a match, you can turn over another card. If it matches, too, you can keep going. The more cards that match, the higher your points—but look out! If you turn over a card that doesn’t match, you lose everything you’ve gained so far, and now your opponent knows where all of those matches are… It’s fun, it’s fast paced, and it’ll keep you on your toes.

I was first introduced to Carcassonne by my pals Leslie and Jackie. We would gather a group of friends to play this almost every night when we worked at Philmont together. Then, when Leslie and I backpacked across Europe together, we made a point of visiting the medieval city the game is named after. Carcassonne is kind of a hybrid between Settlers of Catan and Risk. Each player takes turn adding tiles to the “board.” Tiles can have any combination of roads, cities, monasteries, and fields, which players can claim for points. Because the board is built as you go along, no two games are ever the same. Depending on the group you’re with, a game can take 30 minutes to an hour or more. This one is a favorite for our household, and we’d love to add some expansion packs.

Labyrinth is a game that’s constantly changing. Each player tries to be the first to navigate the maze and collect magical items and characters. At the beginning of each turn, however, a spare tile is used to shift a row or column of the game board, changing the layout. The game requires strategy and thinking ahead, and competition can be fierce as players block each other or push each other off the board. Game play takes 20-30 minutes.

Othello is another game that takes strategy and foresight. Each player takes turns stealing the other player’s tiles by trapping them with their own color. When no more moves can be made, whichever color dominates the board wins. It’s a relatively quick game unless you like to take your time thinking about each move—and trust me, you’ll want to think it through. But even if you take your time, you’ll want to start a new game right away. Brett and I often spend a couple of hours just playing back-to-back games of Othello because we enjoy it so much.

Rock Me Archimedes requires planning and a steady hand. Players take turns trying to move their marbles from one end of the teeter-totter board to the other without it touching the table—or, at least, that’s basic play. The nice thing about this game is that once you know how the board moves, you can get creative and add extra challenges for yourself or make up house rules—they’re actually encouraged in the instructions! We like to play a regular round first and then follow it with countless rounds inspired by the question, “What would happen if…?”

If you know how to play the card game Rummy, Rummikub is pretty much the same thing with tiles. Each player tries to rid their rack of tiles by combining them into sets of the same number or runs of consecutive numbers. Once you have tiles on the table, you’re also allowed to play on other piles to help pare down your hand. Since you pick a max point level to play to, Rummikub can go as short or as long as you want it to. It’s quick, it’s easy, and it’s fun. (It’s also way easier for kids to play since they don’t have to hold a bunch of cards in their hand…)

I’ve only played Splendor once, but I was enchanted. The aim of the game is to earn “prestige points” by amassing development cards. Cards can be purchased if you have enough gems in your bank, or you can reserve development cards so that no one else can buy them before you do. You can only reserve up to three cards and keep up to 10 tokens at a time, so it does take some strategy.  Splendor is honestly a bit complicated in the beginning, but once you get the hang of it, it’s a lot of fun.

This is a game I have yet to win, but I still really enjoy it. It’s kind of a cross between Risk, Chess, and Guess Who. Each player has an army full of foot soldiers, bomb techs, captains, admirals, generals, etc. They each secretly arrange their army on half of the board however they’d like, then advance on their opponent. If a foot soldier goes head to head with a General, the foot soldier is taken captive. Spies help you suss out where your enemy’s higher ranking pieces are, but be careful not to accidentally set off a bomb! This game takes a bit more time—unless you’re as lousy at battle strategy as I am and your opponent trounces you quickly…

I first played one the original game board with the American map, but after the aforementioned trip across Europe, my sister and brother-in-law gave me the European version. Each player is given 2-3 route cards, and they must build tracks that connect the cities listed on each card. Tracks are built by collecting matching cards to buy sections of track. Since only one player can use each line, you have to try to build your track before your opponent blocks your way with their own. It’s competitive and wildly entertaining, and definitely one of my all-time favorite games.

What are YOUR Favorite Two-Player Games?

Games are a great way to bond as a couple or a family. After all, don’t they say, “The family who plays together stays together”? I am a firm believer that that is true, so I’m always on the lookout for new games to play. What are your favorites? Share in the comments below or over on our Facebook page! 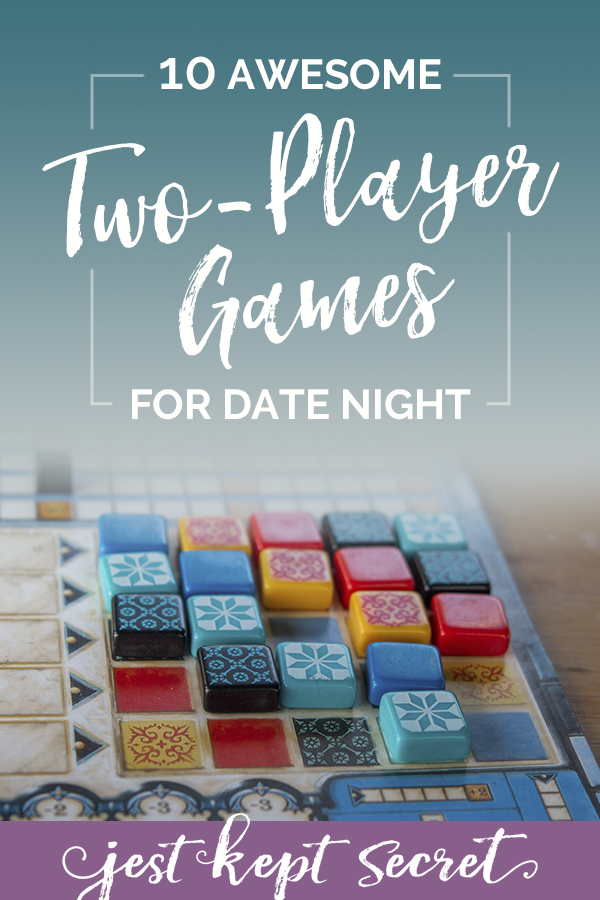